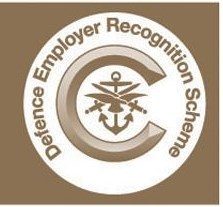 MWH Treatment is proud to announce it has been recognized with a Bronze Award by the U.K.’s Defence Employer Recognition Scheme for its commitment and support to the Armed Forces.

Operated by the Ministry of Defence, the Scheme recognizes U.K. employers that voluntarily pledge their commitment to support the Armed Forces community by aligning their values to the Armed Forces Corporate Covenant and that serve as inspiration to other organizations to do the same.

This accolade recognizes MWH Treatment for its continued commitment to the Covenant almost a year after it was signed. As part of its pledge, MWH Treatment agreed to take a positive approach toward current or prospective employees who are members of the Armed Forces community. As demonstration of that pledge, the company committed to promoting an Armed Forces friendly organization that welcomes reservists, Armed Forces veterans, cadet instructors, and their families.

“We’re proud to have received the Bronze Award from the Defence Employer Recognition Scheme and to be associated with this initiative. MWH Treatment is passionate about ensuring our Armed Forces are properly represented across our business and that ex-service men and women are given every opportunity to succeed, be fulfilled, and enjoy their life as civilians.”

After learning of the award, Adam Houchin, plant manager for MWH Treatment, remarked:

“MWH believes in investing in its employees and is fully committed to supporting ex-service personnel in their long-term career development. I served in the British Army for 12 years. I have always felt a sense of pride and passion working for MWH. Some of my colleagues have joined from the Forces and have such a positive impact on other employees; I look forward to seeing this group grow and develop and this award supports our vision as a further example of the dedication and commitment of MWH.”

MWH Treatment is looking forward to a bright future working in partnership with our Armed Forces and providing opportunities for jobs and training. We anticipate this effort will help our veterans develop new skills that will lead to successful civilian careers.