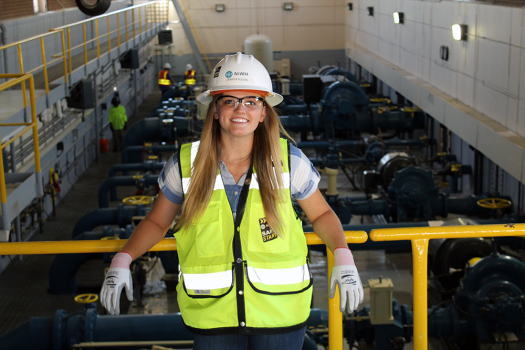 Born to be a Builder

Jessica Kleven is “pumped up” about her internship on Denver Water project.

Jessica Kleven has been walking around construction sites since she was a kid.

“As far back as I can remember, I would walk around job sites with my dad, look at the floor plans, and go into my little notebook and sketch out different ideas,” said Jessica, who grew up in Pueblo, Colorado helping out with the family’s homebuilding business.

Jessica originally wanted to be an architect. In middle school, her parents bought her 3D modeling software so she could work on her floor plans.

“It was the most indoor thing I did as a child,” said Jessica, who describes herself as ‘Colorado outdoorsy.’ “I would sit on the computer learning how to draw 3D versions of my sketches, which was really cool.”

By the time she reached college, Jessica became more interested in the construction side of design-build. Specifically, she was drawn to big infrastructure projects because of the ongoing changes and challenges a jobsite brings.

So, when the Colorado State University senior in construction management first met the team at MWH during a Career Fair, Jessica knew she’d found a perfect match.

The MWH people “were really nice, very easy to talk to,” Jessica said. “So, I was really excited when I found out they were looking for a six-month intern. This is a great opportunity for me.”

At Hillcrest, Jessica is being mentored by the onsite quality and safety director, David Rapier, to learn the ins and outs of managing a quality construction project.

“When I am out in the field, I am usually taking photos and making notes on how things are going,” Jessica said. “I am also learning how to conduct inspections, so I will be able to help out on the inspection process on top of Tank 2.”

Being a woman in construction means a lot to Jessica and it helps that she has support from her professors and family, in addition to the people she works with at MWH. Her dad’s advice is straightforward.

“Work hard and be persistent,” she said. “Things may not go the way you wanted the first time around but eventually you will get there if you keep working towards it.”

And mom’s advice? “Use a calendar,” she said, laughing.

“The guidance Jessica has received from her parents are great words to live by for a future construction project manager,” David said. “We’re hoping she’ll come back and make MWH her home.”