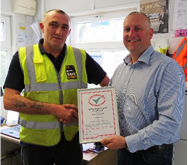 Congratulations go out to the Hulland Ward Sewage Treatment team, recently named one of the top performing construction sites in the U.K. by the Considerate Constructors Scheme.

Chosen from hundreds of other sites, the Hulland team was singled out for their hard work and dedication to performance excellence. Under the leadership of Adrian Woods, site manager, and Mark Slatcher, project manager, the team achieved some of the highest standards in the U.K. construction industry, scoring in the top 7.5 percent.

With this recognition as one of the highest performing sites in the U.K., MWH will now join other recognized organizations at the prestigious National Site Awards to be held at the Lowry on April 14th. There the teams will be awarded either Gold, Silver or Bronze awards in recognition of their achievements in raising the bar and improving the image of construction.

Built in the 1960s, the Hulland Ward site is located in Derbyshire Dales, 15 miles northwest of Derby. It currently serves a population of 900 within the Ecclesborne catchment area. In 2014, MWH started work at the site to replace a 50-year-old conventional, biological filter works with a new primary and secondary treatment works to treat wastewater. A high priority in Severn Trent’s rural strategy, the decision to upgrade the works has resulted in an ultra-low carbon and low maintenance solution which effectively meets discharge consent.

The site has generated considerable interest over its 18-month construction for developing the first vertical reed beds in the U.K. The site provides a works that fully integrates with the local surroundings by lending itself as a cleverly constructed wetland. The bank attracts more wildlife and improves the overall water quality of the rivers surrounding the Ecclesborne catchment area by adopting the best CO2 reducing practices and enabling a naturally rich and sustainable environment in which species thrive.

This site is a credit to MWH Treatment, as it demonstrates the value our company places on safety, the public, our workforce and the environment. Congratulations to Mark Slatcher, Adrian Woods and the entire Hulland Ward team on this outstanding achievement.