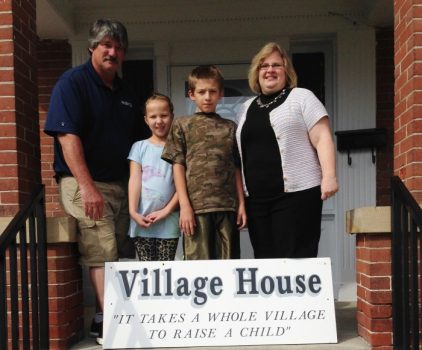 Lending a Helping Hand to the Fremont, Ohio Community

Doug Hart, a general superintendent with MWH, and his wife Cathy are dedicated to serving the community they call home. Doug is currently working on the Water Pollution Control Center in Fremont, Ohio as general superintendent. During their time in Fremont, Doug and Cathy have dedicated several volunteer hours serving Village House – a local organization who provides a comfortable, home-like environment for children who are required to have supervised visitations with their family members.

Their time has been spent with the aid and upkeep of Village House’s historic brick home. They have helped Village House get up to fire code and become UL Safety compliant by installing an emergency lighting fixture, and replacing and rewiring all the electrical outlets in the facility.

During the Village House summer fundraiser, they actively sold over half of the raffle tickets in less than two weeks, promoted and advertised the fundraiser, purchased several items and gift baskets to be placed in the raffle, and spent the entire weekend working the fundraiser.

“Village House has been very fortunate to have encountered such a generous, compassionate and community minded husband and wife team, Doug and Cathy Hart,” said Sue A. Fuller, executive director of Village House. “They have volunteered many hours to this organization in the past several months as well as several hundred dollars of supplies and other donations all to help us in providing a safe, clean and family friendly environment for our supervised visitation and exchanges to occur. We are very grateful for people like Doug and Cathy Hart.”