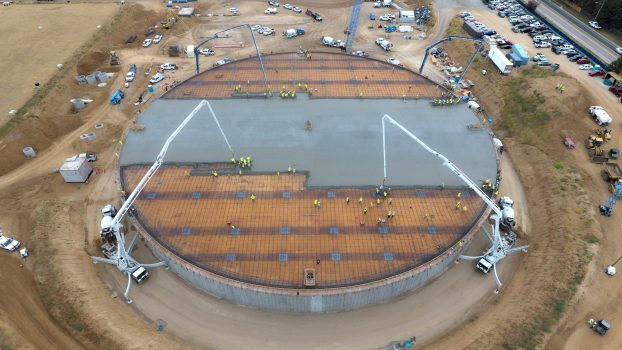 The Hillcrest Reservoir Tank and Pump Station Replacement project team reached another major milestone as it nears completion of Tank 1 with the deck placement on September 16. This is one of three 15-million-gallon (mg) storage tanks being constructed at the facility. The deck of Tank 3 will be placed in November, and construction of Tank 2 will begin before the end of the year.

During the Tank 1 deck placement, MWH Constructors and Denver Water invited neighbors to the project site to see the progress being made. The team set up a safe viewing area and provided coffee and donuts.
Several neighbors attended and were able to ask questions and share any comments or concerns they had about the project.

The project consists of removing two conventionally reinforced concrete storage basins with a combined capacity of approximately 30 mg and replacing them with three new circular pre-stressed tendon-type concrete basins, which will have a combined capacity of 45 mg. It also includes replacement of the existing 115 million gallons per day (mgd) pump station with a new structure. The project is scheduled for completion in 2020.