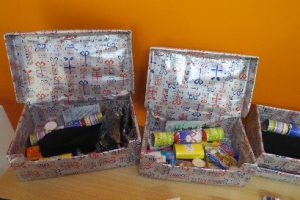 MWH is proud to have been working closely with Support our Soldiers (SOS) during the Poppy Appeal and remembrance period. MWH employees were busy collecting gifts and making Christmas parcels to honour and thank our brave servicemen and women.

MWH recognises the sacrifices our soldiers make, being away from their families and friends in order to serve and protect our country. As a result, MWH employees collected and delivered over 400 gifts to the SOS charity which will ensure that these gift parcels are received by our soldiers and provide them with a boost over the festive season.

Each gift box was carefully packed by MWH Employees and each one contained a gift card from the company. The card provides details of our business activities and welcomes any current serving member to contact us to discuss potential job opportunities when they retire from service.

This initiative follows our promise made on 30 April 2015, when Blair Lavoie, president of MWH, signed the Armed Forces Corporate Covenant. The signing of the covenant acknowledged that MWH recognises the contributions that military personnel, reservists, veterans and their families bring to the world’s security and the value that these people can bring to our business. The aim of the covenant is to ensure that the armed forces community can engage with businesses and develop relationships.

On Friday, 13th November, the gift boxes were taken to Support the Soldiers headquarters in Cambria. Accepting the gift boxes on behalf of SOS, Ryan Winthorp merchandise Co-coordinator and Trustee od the charity was overwhelmed by the generous contributions by MWH employees. “On many bases there’s very little welfare available and this is exactly the kind of thing our soldiers need,” he explained. “There’s enough here to provide 40 soldiers with a gift box this Christmas. Thank you, that’s a fantastic effort. On behalf of everyone at SOS, I’d like to say a big thank you for your thoughts and support, and wish you and your families a very nice Christmas”.

Paul Gledhill, who championed the covenant, also expressed his gratitude to everyone who supported SOS and the Poppy Appeal this year. “It’s great to see the fantastic efforts people have made in supporting the various military based charities. Back in June, it was great to see so many people donating prizes for our British Legion raffle and again with the SOS parcels at Christmas. You are supporting such worthwhile causes and for that you should be very proud.”