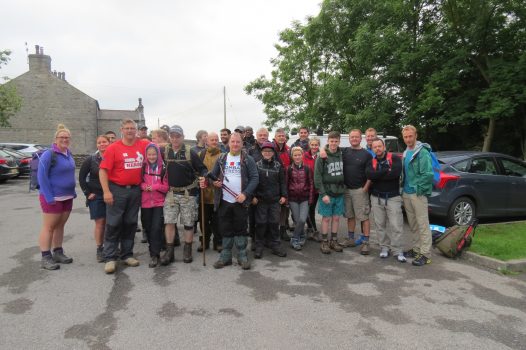 Massive congratulations to the 50 MWH staff, suppliers and joint venture partners who, along with their friends and family, took on the Yorkshire Three Peaks Challenge on Saturday, June 25th, traveling a total distance of 1,250 miles and raising over £2,000 for charity.

It was an amazing day with the enthusiastic walkers and runners meeting in the bustling, quaint Yorkshire village of Horton in Riddlesdale. Horton in Ribblesdale is the traditional start and end point for the Three Peaks Challenge. Long-distance footpaths pass through the village, past St. Oswald, a Grade I listed Norman village church, and along the meandering beck and dry stone walls to begin the ascent to the summit of Pen-Y-Gent.

The teams had a steady start to the challenge, enjoying the scenery as they hiked 694 metres up Pen-Y-Gent, before venturing down the long stony paths and wooden stiles making their way over to the Ribblehead Viaduct.

A quick pit stop after 10 miles and it was soon time to tackle the steep, meandering path to reach the summit of Whernside. Standing tall at 736 metres high, Whernside is second and the tallest of the three peaks and offers incomparable views of the Yorkshire Dales and the Riddlehead Viaduct. The Viaduct is a beautiful limestone construction built in 1870. It stands 32 metres high 400 metres long, and is visible along this part of the route.

With 19.5 miles completed, the participants faced their final peak―Ingleborough. At 724 metres high, Ingleborough is not the tallest but is certainly the steepest of the three peaks. It challenged the participants to navigate a steep, zigzagged path to the top, often scrambling on hands and knees.

But there was no time to relax at the summit. With three peaks to climb in under 12 hours, it was soon time to begin the descent and make their way to Horton railway station and back to the village of Horton in Ribblesdale.

As the walkers and runners returned to the village it was clear by their smiles and glowing faces that they felt pride and satisfaction at their accomplishment.

Back at camp it was finally time to relax. With good weather on their side, the teams enjoyed a barbeque and gave toasts. Satisfying their hunger all agreed that there was nothing like a long hike to work up an appetite and that there was nothing like using our walking running and fundraising capabilities to do something worthwhile for a good cause.

Thanks to their efforts, the money raised will go toward assisting Armed Forces personnel and their families who make many sacrifices in serving their country. The money will be divided between two selected armed forces charities — Home4Hereos and Combat Stress. Since signing the Armed Forces Corporate Covenant in April 2015 MWH has now raised over £3,000 for Armed Forces charities.