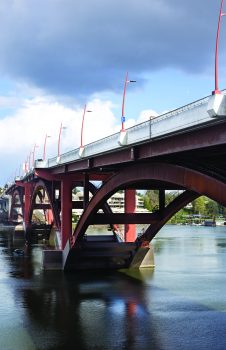 The replacement of the Sellwood Bridge in Portland was named the 2017 Project of the Year at the annual Top Projects competition. This competition is considered one of the top industry events in the Pacific Northwest, which made receiving this award a great honor.

The Sellwood Bridge received a near perfect score, earning itself the highest score in the competition. General contractor Slayden-Sundt Joint Venture, T.Y. Lin International Group, and project owner Multnomah County were recognized for their efforts in using innovative solutions to overcome the challenge of creating this bridge.

The project team replaced the original structure, which for miles is the community’s only crossing over the Willametter River, with a wider bridge that could accommodate the area’s growing traffic. Instead of rebuilding the bridge in sections, the team created a “shoofly” bridge which allowed the team to work without shutting down traffic.

The approach involved lifting the old bridge deck and truss with hydraulic jacks and moving it to one side, then placing it on a set of temporary piers and connecting it to temporary approach spans so that traffic could continue to use it while the new bridge was constructed. The 1,100-foot-long steel bridge truss was moved in a single 12-hour operation and became one of the longest bridge sections ever to be moved.

“The Slayden-Sundt and Multnomah County team approach and coordination between all parties involved was key in delivering this successful project,” said Greg Huston with Slayden Constructors. “We are proud to be a part of this project that will serve the community for years to come.”