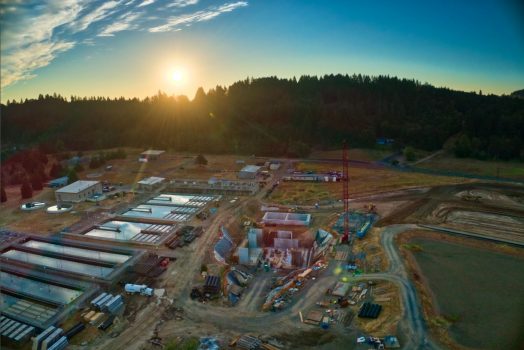 Question: How do you design a water-delivery pipeline for an area that has averaged nearly one earthquake per week during the past year?

Most agree that Oregon, with its breathtaking mountains and rugged coastline, is a scenic wonder. Yet the geologic forces that make it so spectacular also make it one of the most earthquake-prone spots in the country.

Take, for example, the Hillsboro, Oregon, area. Just a half-hour’s drive from Portland, it has been the scene of 49 recorded earthquakes in the past 365 days. Most measure less than 2.0 in magnitude, but the fact remains: any new construction requires innovative planning, design and implementation to remain resilient in the midst of seismic activity common to the area.

That was the challenge for Oregon’s Joint Water Commission (JWC) — owned in partnership by the cities of Hillsboro, Forest Grove, Beaverton, and the Tualatin Valley Water District. The JWC currently treats, transmits and stores drinking water for more than 365,000 customers and operates the largest conventional water treatment plant in Oregon. However, due to population growth, the JWC needed to strengthen the water plant infrastructure and increase capacity from 75 MGD (million gallons per day) to 85 MGD while factoring in a potential future capacity of 105 MPD.

Because the state of Oregon requires new and retrofitted construction to meet rigorous seismic safety standards, this project sets a precedent for earthquake-resistant treatment plants in the Pacific Northwest.

“We provided a variety of 24-inch to 48-inch Flex-Ring pipe and fittings,” said Jeff Blakely, AMERICAN senior sales engineer. “The design we helped develop is capable of withstanding 22 inches of permanent ground deformation due to liquefaction (a destabilization that occurs when saturated soil loses its firmness) during a seismic event.”

Robert Montgomery, senior project manager for Slayden Constructors Inc., said, “AMERICAN worked with the engineering team (from Jacobs) even before the project went out to bid. Then, AMERICAN came out and did a class for our installation people because the earthquake-resistant system is such a new thing. That was very helpful. Jeff Blakely and his team have been very responsive.”

The project will be completed via an alternative delivery model known as Construction Manager/General Contractor (CM/GC). This method allows the owner to engage a construction manager during the design process to provide constructability input.

Completion is scheduled for October 2019. To learn more about this project, visit www.JWCWater.org. The drinking water produced by the JWC Water Treatment Plant continues to meet and exceed all compliance standards set by the Environmental Protection Agency’s (EPA) Safe Drinking Water Act.

NOTE: Oregon earthquake data can be found at https://earthquaketrack.com/us-or-hillsboro/recent and is accurate as of April 23, 2019.