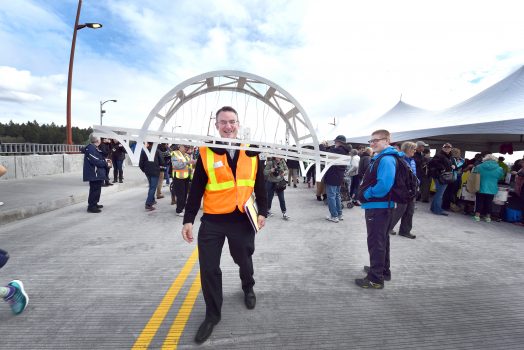 Slayden-Sundt, a joint venture of Slayden Constructors, Inc. and Sundt Construction, Inc., celebrated with Multnomah County in February at the opening of Multnomah County’s new $227 million Sellwood Bridge in Portland, Oregon. The project team replaced the original, deteriorating structure with a wider, pedestrian-friendly bridge that can accommodate the area’s growing traffic volume. The 2,000-foot-long bridge, originally built in 1925, is the community’s only crossing over the Willamette River for many miles in each direction, making it the state’s busiest two-lane bridge as well as an iconic piece of architecture.

Serving as the Construction Manager/General Contractor (CMGC), Slayden-Sundt broke ground on the project just over four years ago and employed a number of innovative approaches along the way to help reduce disruption to the community and provide greater protection for the environment. Most notably, the team utilized a bold approach to construct the new bridge in the footprint of the existing structure without shutting down traffic flow. Rather than rebuilding the bridge in sections and shifting traffic back and forth between structures and newly completed segments, the team created a “shoofly” bridge. The approach involved lifting the old bridge deck and truss with hydraulic jacks and moving it to one side, then placing it on a set of temporary piers and connecting it to temporary approach spans so that traffic could continue to use it while the new bridge was constructed. The 1,100-foot-long steel bridge truss was moved in a single 12-hour operation and became one of the longest bridge sections ever to be moved.

“The Slayden-Sundt and Multnomah County team approach and coordination between all parties involved was key in delivering this successful project,” said Greg Huston with Slayden Constructors, Inc. “We are proud to be a part of this project that will serve the community for years to come.”